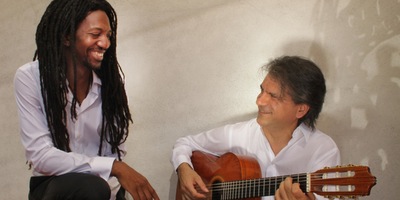 “The sophistication and eloquence one can hear, as it is clear to me, that Spiros Exaras’s way of executing guitar is compelling and beautiful. His work here as exemplified with pianist Elio Villafranca is aesthetically wonderful.” – Al Di Meola

“The musical history of Cuba is full of extraordinary pianists, and Elio Villafranca is amongst the best representatives of the new generation of Cuban pianists and composers.” – Paquito D’Rivera

A major collaboration in the world of music has recently taken place in New York City between internationally acclaimed Cuban Jazz pianist Elio Villafranca and world-renowned Greek Classical- Jazz guitarist SpirosExaras. And what has emerged is the creation of a unique sound combining the passion of Cuba’s African Diaspora with the mysteries of Greek musical heritage in the Jazz experience of these two masters.

Spiros’s credits include performances with eminent Greek composers and performers such as Mario Frangoulis, Mikis Theodorakis, Yannis Markopoulos, Alkistis Protopsalti, Evanthia Reboutsika, Kostas Hatzis and Elias Andriopoulos, while he has performed and recorded internationally with such artists as Shirley Bassey, Randy Brecker, legendary Jazz singer Mark Murphy and Grammy Award winners Arturo O’Farrill, David Valentin and Hernan Romero. He has also crossed over into pop music being the featured guitar soloist on Mariah Carey’s hit single “My All”. He has performed with symphony orchestras and jazz ensembles like “Orchestra Of Colors”, “Greek National Radio and Television Orchestra” (ERT) and “Queens Symphony Orchestra”. His recent CD “Phrygianics” was released by Blue Note Records to a major critical acclaim, in addition to composing music for several films and theatrical plays.

Over the last year, Elio’s career has developed substantially with the international critical acclaim of his latest album, “The Source In Between” and performances in New York at Lincoln Center, the Blue Note, Caramoor Music Festival and a long list of European tour dates at clubs, concerts and major music festivals. In the course of this he’s worked with such Jazz legends as Wynton Marsalis, Pat Martino, Sonny Fortune, Eddie Henderson, Johnny Pacheco, Horacio “El Negro” Hernández and Lenny White, to name a few. Elio has also been honored by BMI with a Jazz Guarantee Award and recently received the first annual Heineken Green Ribbon Master Artist Grant to create a concerto for a Mariachi ensemble and symphonic orchestra.
In performance, these two master musicians play original pieces and traditional Greek and Cuban songs in their own arrangements. Their new CD “Old Waters New River” has been released by Harbinger/Naxos Records (2014). 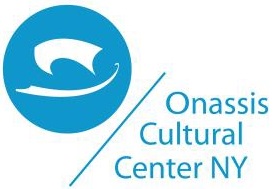 Pantelis Voulgaris & I. Karystiani at Onassis Cultural Center in NYC