An attempt to get rid of Archbishop Demetrios 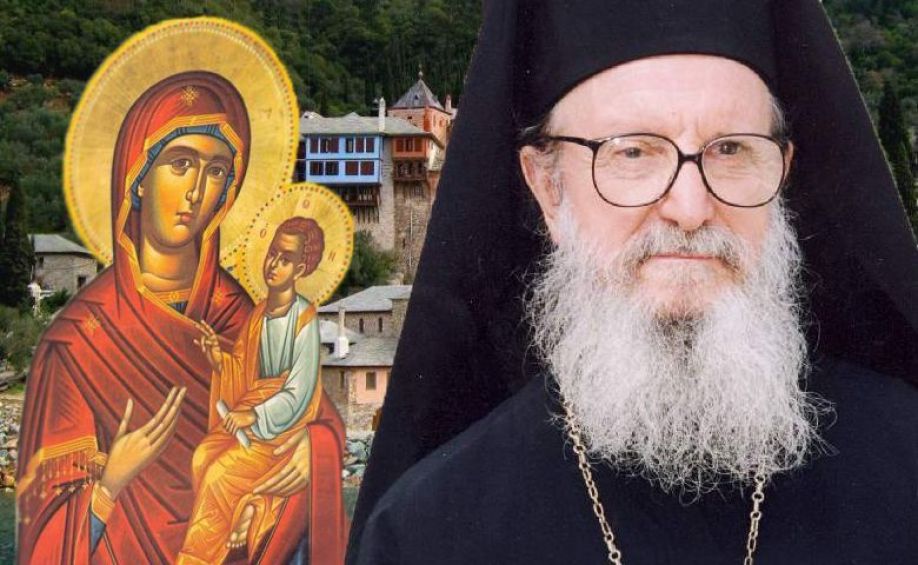 THINGS DON’T CHANGE IN GREEK ORTHODOX ARCHDIOCESE OF AMERICA. Rumours are circulating in the omogenia about the possible resignation of Archbishop Demetrios of America. The National Herald reporter Theodoros Kalmoukos, in particular, has raised this issue in several articles.

It is fair to note that there were similar publications by the same author way back in April 2010. At the time, the Exarch of the Ecumenical Patriarchate was accused of ignoring problems that had arisen amid talks about the ecclesiastical jurisdiction over the Orthodox Palestinian parishes in the USA and the lack of management abilities in general. He was also accused of acting irresponsibly towards the issue of the possible inclusion of the Orthodox Church in America (OCA) into the Episcopal Assembly of North and Central America.

During the Standing Conference of Canonical Orthodox Bishops in the Americas (SCOBA) in 2009, Metropolitan Emmanuel of France, regarded as a spiritual leader of the 300 million Orthodox Christians worldwide, stated on behalf of the Ecumenical Patriarch that the head of OCA should have a vote in the Episcopal Assembly. Moreover, explaining the absence of the Bishop of the OCA from Mexico City among those invited to the Episcopal Assembly of South America, Constantinople officially announced that the OCA would be represented at the Assembly of North and Central America.

Nevertheless, according to the sources of Mr. Kalmoukos, when Archbishop Demetrios invited the Primate of the third largest Orthodox diocese of America, Metropolitan Jonah and accompanying bishops to the Assembly, Patriarch of Constantinople Bartholomew became furious (though it was made in full agreement with the Pan-orthodox Chambésy decision on the orthodox diaspora). It was reported that the Primate of the Greek Orthodox Archdiocese of America (GOA) called the inclusion of the OCA delegation in the list of participants an error but the then director of the GOA for External Church Relations, Mark Arey, gave another explanation. The fears of the Phanar about the rapprochement between the GOA and OCA are quite understandable.

The larger part of the revenues of the Ecumenical Patriarchate come from the USA and if the GOA and the OCA unite and withdraw from the jurisdiction of Constantinople, the Phanar will actually lose its livelihood. On this understanding, Patriarch Bartholomew allegedly gave a clear instruction not to invite the OCA to the Assembly and Archbishop Demetrios disobeyed him. In this case, the statement of Metropolitan Emmanuel (mentioned above) remains incomprehensible.

Perhaps it was made in public with short-term interests in mind, without thinking of the actual situation and any intention to act, and that Patriarch Bartholomew’s did actually refuse to invite the OCA? If the latter is true, then is it improbable to suggest that Mark Arey deliberately acted in his Primate’s stead by sending an invitation to Metropolitan Jonah and devising a story that undermined Archbishop Demetrios’s reputation? Moreover, in January 2010, there was another attempt to discredit the Exarch of the Ecumenical Patriarchate in America. Allegedly, he unreasonably and indifferently refused to accept into the Academy of St. Basil two orphans from Congo.

These charges were refuted by the GOA. According to the articles in The National Herald, Patriarch Bartholomew held a meeting dealing with this subject, attended by the then-Secretary-General of the Holy Synod, Archimandrite Elpidophoros Lambriniadis, (one of the main contenders for the position of the GOA Primate) and several hierarchs. It was reported that most of those present opposed the idea about the Ecumenical Patriarch supporting the Archbishop of America, and that Patriarch Bartholomew himself spoke positively about the accuser of Archbishop Demetrios Metropolitan Theoliptos. But His All-Holiness was forced to publish a statement to the contrary, allegedly under pressure from the influential American Archons.

The National Herald article in 2010 also mentioned that the Primate of GOA himself saw his successor as Metropolitan Savva (Zembillas) of Pittsburg, and the “unofficial Archbishop”, Fr. Alexander Karloutsos, supported the candidacy of Metropolitan Emmanuel of France. The great authority of Fr. Alexander (who is very close to the Ecumenical Patriarch) in the GOA is emphasized by his playing an important role in the election of the previous Primate of the American Archdiocese, Archbishop Spyridon. Now, similarly, the Primate of GOA is accused of being irresponsible while dealing with the pressing problems of the Archdiocese including its bankruptcy. Archbishop Demetrios was even forced to remove Jerry Dimitriou, who has been handling the administrative and financial issues of the GOA for the past 19 years, from the position of the Executive Director of Administration.

His Eminence is accused of negligence in managing the Leadership 100 Fund named after Archbishop Iakovos. Allegedly, he did not provide the fund with sufficient support and as a result the Ecumenical Patriarchate was deprived of the guaranteed access to the collected funds. But there’s an interesting question: who was behind the decision to change the status of the “Leadership 100 Fund to an independent NGO in 1998? Archbishop Spyridon? Patriarch Bartholomew? It is interesting to note that the negotiations on changing its status with one of the Fund’s founders, Michael Jaharis (who died in 2016), were conducted by the same Fr. Mark Arey, who later became the Executive Director of The Hellenic Initiative. Now, let’s have a look at the Executive Committee of the Leadership 100 Fund.

One of its members is George Tsandikos, whose resignation from the position of Vice President of the Archdiocesan Council Mark Arey approved. The others are Demetrios G. Logofetis and Mike A. Manatos – each associated with Patriarch Bartholomew. Fr. Alexander Karloutsos played a significant role in attracting donations to the fund. Why is he doing this, if, allegedly, the use of funds in the Church’s interests is not guaranteed? And is there any reason to say that Archbishop Demetrios has neglected his duties? Supposing that, in reality, many things in the GOA are decided by powerful lay people, who can influence the decisions of the Ecumenical Patriarch himself, how can one criticize the elected Primate of the Archdiocese for the negative consequences of the actions of “shadow hierarchs”? The Greek big business lobby in the GOA appeared long before Archbishop Demetrios, and judging from the status of Fr. Alexander Karloutsos, this was beneficial for Patriarch Bartholomew, and not for his American Exarch. Mark Arey and Alexander Karloutsos are orchestrating the present campaign against the Primate of the GOA and want to substitute him with Metropolitan Emmanuel.

At the same time Mark Arey and Alexander Karloutsos are associates of Patriarch Bartholomew (who is connected with them financially) and who do not belong to the Archbishop Demetrios’s circle. The trouble is that these “shadow hierarchs” have lost interest in spiritual life, and as a result, the life of the Church is determined by their political, ethnic and economic aspirations. If so, it is they who should be held accountable for the poor financial results. After all, what is the Primate’s main concern – administrative or spiritual matters? Should he be wholly responsible for decisions made by the Archdiocesan Council in the financial sphere and actions of people elected to the relevant posts? At the same time, Patriarch Bartholomew is dissatisfied even with the fact that the American Exarch considers it necessary to submit the revision of the list of candidates for election to the episcopacy at the Clergy Laity Congress. The main fault of the Primate of the GOA, as President of the Archdiocesan Council, is that he does not follow the authoritarian model of management usual for the Phanar.

However, America is a democratic state with management standards different from those of the oriental despotism. It is noteworthy that Mark Arey and his supporters advocate a large-scale sweep in the GOA. This laicized cleric would like to get rid of the Vice President of the Archdiocesan Council George Tsandikos, the CFO Fr. Soterios Baroody, Bishops Andonios, Savas, Alexios, the President of the Hellenic College Holy Cross Christopher Metropulos, both archbishopric deacons, almost all staff of the Department of Communications and the Registry. That is what awaits the GOA if the Phanar seeks to pursue the resignation of Archbishop Demetrios.

If this happens, Jerry Dimitriou is considered to be one of the few exceptions whom Mark Arey would like to keep in his place, despite several compromising facts. This only confirms that the decision of Archbishop Demetrios to dismiss the Executive Director of Administration is indeed justified. What exactly is Mr. Dimitriou’s transgression? Maybe it is the $8.5 million deficit in the GOA budget? One way or another, Mr. Kalmoukos’ assumptions from 2009 have not been confirmed: Archbishop Demetrios has been in power in the Greek Orthodox Archdiocese of America for more than seven years. Let us hope for the best and trust that all these machinations against the elected Primate of the GOA will not have negative consequences for the Church. 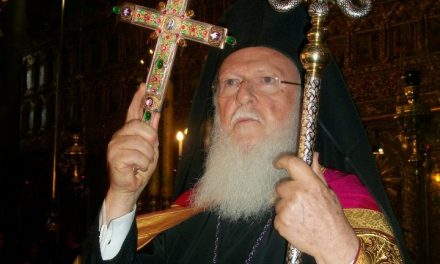 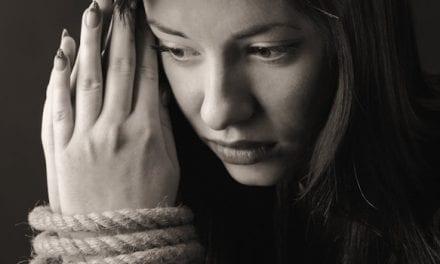 The All Saints Monastery support and rehabilitation program for women 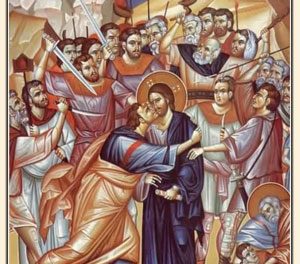 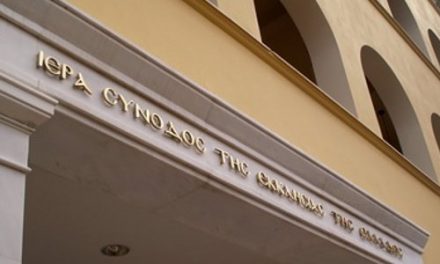