WASHINGTON, DC – On February 22, 2007, AHI hosted a Noon Forum on the special presentation of a new book Cyprus: A Contemporary Problem in Historical Perspective by Professor Van Coufoudakis, Rector Emeritus at Intercollege in Nicosia, Cyprus and Dean Emeritus of the School of Arts and Sciences at Indiana University-Purdue University.

"Cyprus: A Contemporary Problem in Historical Perspective is an extraordinarily sensitive and balanced analysis of an international crisis whose most recent phase was created in 1974 when Turkey invaded and occupied 37 percent of the island.  This scholarly assessment could be useful in the hands of those who honestly seek to understand the nature of the Cyprus Question and those who may strive toward its solution," said Theofanis G. Stavrou, general editor, Minnesota Mediterranean and East European Monographs.

Dr. Van Coufoudakis is currently the Rector Emeritus at Intercollege in Nicosia, Cyprus.  He is also Dean Emeritus of the School of Arts and Sciences at Indiana University-Purdue University at Fort Wayne, and holds the rank of Professor Emeritus of Political Science.  He served on the Graduate Faculty of Indiana University.  From 1986 to 1995 he served as Assistant and later as Associate Vice Chancellor for Academic Affairs.  He is the author of one book, the editor of four books, and the author of over eighty journal articles and book chapters published in the United States, Great Britain, Belgium, Canada, Italy, Greece and Cyprus.  His research focuses on the politics and foreign policies of Greece, Turkey and Cyprus, as well as post-World War II U.S. foreign and defense policy with particular emphasis on Southeastern Europe, the Eastern Mediterranean and the Middle East.

He has lectured in major universities in the U.S., Great Britain, and Greece, and institutions such as the Foreign Service Institute (Washington, D.C.), the NATO Defense College (Rome, Italy), the Canadian Institute for International Peace and Security (Ottowa), and the Istituto Affari Internazionale (Rome, Italy).

Dr. Coufoudakis is a member of the Editorial Board of the Greek edition of Foreign Policy and served two terms as President of the Modern Greek Studies Association, the premier interdisciplinary organization in the U.S. devoted to the study of Modern Greece.  Dr. Coufoudakis served as Honorary Consul of the Republic of Cyprus for the State of Indiana.  On March 25, 1998, the President of Greece awarded Dr. Coufoudakis the decoration and title of Commander of the Order of the Phoenix for his contributions to the study of Greece.  March 3, 2002, he received Indiana University's Ryan Award for his contributions to the university's international programs.  On May 15, 2002, Indiana University awarded him the degree Doctor of Humane Letters, Honoris Causa.  On April 26, 2002, the Governor of the State of Indiana presented him the "Sagamore of the Wabash" award.  Dr. Coufoudakis holds a Ph.D. degree in Political Science and an M.P.A. degree from the University of Michigan, and a B.A. in Public Administration from the American University of Beirut.

Please find the presentation and a photograph from this event is attached.

For additional information, please contact Georgia Economou at (202) 785-8430 or at georgia@ahiworld.org. For general information about the activities of AHI, please see our website at http://www.ahiworld.org. 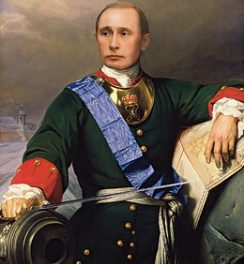 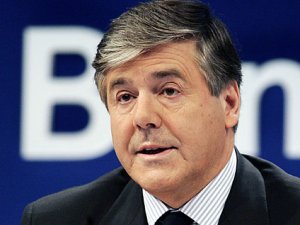 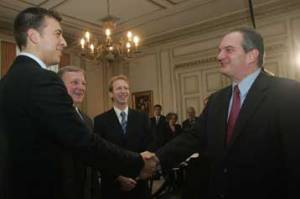