Statement by FM Ms. Dora Bakoyannis at the meeting of BSEC Foreign Ministers 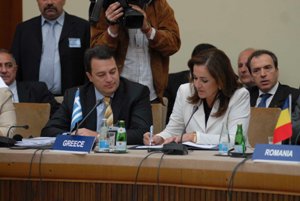 I am honoured to be participating in the 16th Meeting of the Council of Ministers for Foreign Affairs of the Organisation of the Black Sea Economic Cooperation, ere, in the historic and friendly city of Belgrade. Over the past six months, the Republic of Serbia has held the BSEC Chairmanship-in-Office with praiseworthy professionalism and skill. We would like to congratulate the Chairmanship for the successful results presented today to the Council.

The BSEC-EU interaction is, we believe, a crucial asset for our Organisation. The Chairmanship's actions to further strengthen BSEC-EU relations has been both extremely useful and important. We officially supported this Chairmanship in organizing common meetings with the EU bodies.  In this context, I  wish to highlight the seminar entitled "EUROPEAN REGIONALISM: PERSPECTIVES FROM NORTHERN EUROPE AND THE BLACK SEA" which took place last November in Athens. Nourishing, and engaging constructively in the relationship between BSEC and the EU, is an on-going process, and we are committed to continuing our efforts.

Greece strongly supports the aim that our Organisation becomes the main partner of the European Union in the region. Indeed, one way through which this can be achieved is by attributing to the European Union the status of observer to BSEC. In this respect, and according to the internal distribution of competences, the European Commission may represent the Union in a variety of areas. It may also be fully involved in all of the activities of our Organisation. I clearly expressed our stance on these issues within the Council of the European Union as well as in several other instances. I am convinced that all of these efforts have largely contributed to raising the visibility of both the wider Black Sea area and of our Organisation to both the EU member states and its institutions. In this respect, the Communication adopted by the European Commission, on April 11, 2007, entitled "BLACK SEA SYNERGY – A NEW REGIONAL COOPERATION INITIATIVE", marks a new start for an invigorated relationship between us.In parallel, a new programme within the context of the European Neighborhood and Partnership Instrument, the "Black Sea Basin Programme", is making its first steps. Being a pioneering programme in promoting regional cooperation, we hope that it will also become a model EU programme. This will cause a ‘snowball effect' in which the further development of BSEC projects involving central and local authorities, as well as business and civil society can be proposed.

We are hopeful that the EU Troika will be represented at the highest level at the 15th anniversary BSEC Summit, in Istanbul. Greece proposed that, at this important moment, all participating Heads of State or Government adopt a Joint Declaration for the future cooperation in the wider Black Sea area. Such a Declaration may constitute a common political platform for a new multilateral institutional framework of cooperation between the European Union and BSEC.

Bearing in mind the challenges of the 21st Century, Greece has actively supported the Organisation's restructuring on the basis of the Bucharest Statement.This was done in order to transform BSEC into a modern and more efficient institution. Greece contributed to this process of restructuring and proposed the modernization of its budget, namely in that it should use the Euro as its currency. We believe that the budget should be transformed into an updated programme-oriented structure as per the practice of other international organisations. This new structure will substantially assist Greece's works towards the recognition of the Organisation's eligibility for Official Development Assistance by the OECD Development Assistance Committee. If we succeed in this decisive step, we will be able to attract additional international funding for projects by observers and international donors.Moreover, the reforms we have already agreed upon, will increase the Organisation's effectiveness and its capacity to face the future. Indeed, we believe that the forthcoming Summit in Istanbul, will allow our Heads of State to endorse all of these reforms. We must not forget that the BSEC Organisation faces today some new realities and is called upon to overcome significant challenges.Its future lies in its capacity to implement various concrete projects. Irrespective of their scope, these projects should aim to enhance the spirit of cooperation in the wider Black Sea area. They should also contribute to the economic and social development of the entire region. This latter should be viewed as a necessary first step towards its further European integration.In this respect, a lot of effort must be undertaken in the field of infrastructure, and especially in the transport sector.

One of the major projects, in which my country is fully involved, is the construction of the Black Sea Ring Highway.Undoubtedly, this is a very important project. Since the beginning of discussions for the drafting of the relevant Memorandum of Understanding, the Hellenic Republic has tried to provide this project with an impetus, and has proposed to support the Highway's Joint Permanent Technical Secretariat. Located in Thessaloniki, this Secretariat will provide the necessary expertise and other valuable services necessary for the successful implementation of the project. On this occasion, may I recall our proposal that this highway be named «Road of Argonauts», linking the first important project of our Organisation with our common historic tradition. The BSEC Black Sea Ring Highway Caravan which departs from Belgrade, will provide useful data, as well as experience and ‘know-how'  which will be most helpful in the implementation of this project.

Moreover, today's signing of the Memorandum of Understanding for the Black Sea Ring Highway, as well as the signing of the Memorandum on the Extension of the European Motorways of the Sea to the Black Sea and the Caspian Sea are concrete steps towards linking our region to the rest of the European continent. Furthermore, the Black Sea Ring Highway could be upgraded to a Pan-European Corridor, integrating it into a «Βlack Sea Electrical Ring» and a «Black Sea Optical Fiber Network».Indeed, these two proposals are part of the new concept of the «BSEC Integrated Networks», which Greece intents to promote in the coming years. The implementation of the new concept of the «BSEC Integrated Networks» will, however, require the securing of funding from the national budgets of the BSEC member states, the private sector, and international financial institutions. We must all work together towards the materialization of this integrated approach.Today, we will also sign a third Memorandum, namely that of Understanding for the Cooperation between the Diplomatic Academies of the BSEC member states. Through its implementation, the future leading personnel of our Foreign Ministries will foster strong ties, which will facilitate mutual understanding and cooperation.

The aforementioned points are part of a larger direction towards which the Organisation must move if it aims to fully integrate the area into the European continent. Glancing into the future, it is of paramount importance that the Organisation develops a strategic master-plan. Some elements of this master-plan, namely, the Organisation's institutional strengthening, the enhancement of relations with the European Union, and the implementation of some regional projects, have already been outlined. It is also important to try to anticipate further actions, in order to meet the needs of the overwhelming majority of our citizens.

Last but not least, I would like to stress that the Organisation should respond favourably to all the states which manifest an interest in its endeavors and which wish to bring a valuable contribution to our regional cooperation. There should be no exclusions, nor any undue discrimination.

In conclusion, I wish to underline the Organisation's strength in bringing together, around this table, countries with different histories, cultures and religions. We look forward to continuing in the same spirit of close cooperation with the incoming Turkish Chairmanship, and wish our Turkish colleague every success. Naturally, he can count on our firm support.

Finally, let me inform you, that in the forthcoming Istanbul Summit, Greece will be represented by Prime Minister Karamanlis, myself, and Deputy Minister Evripidis Stylianidis.

Thank you very much for your attention. 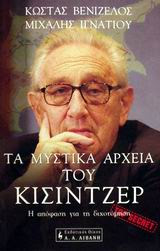