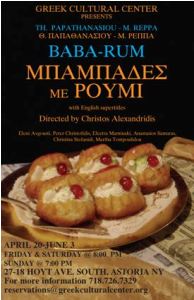 The Greek Cultural Center in Astoria presents the hilarious comedy BABA-RUM by the writers’ duo M. Reppas – Th. Papathanasiou, who co-wrote SAFE SEX, Treis Xarites and Dis Examartein among others.

“BABA-RUM is a great experience for all theater lovers, Greeks and non-Greeks alike. Everyone ought to see the great plays Greeks can write when they put their minds to it…” Το ΒΗΜΑ, 08/12/1996

The play is a satire of the reality of contemporary Greek man, his love for money. Two brothers and their wives return to their village to visit their dying father. There, they meet with Mrs. Vaso, the gossiping neighbor, and Veska, the Russian nurse. As each character unfolds, they face surprises and reversals of fortune that separate them from dad’s money, causing roaring laughter. BABA-RUM, Veska’s favorite desert, hold the key to this comic treasure hunt, in which noone remains innocent.

At the Greek Cultural Center 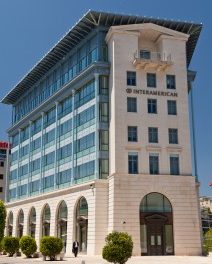 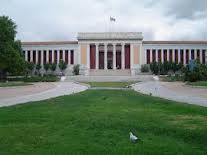 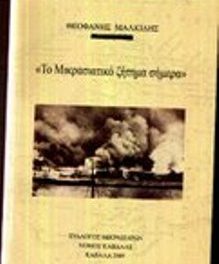