REP. GIANNAROS, DEPUTY SPEAKER OF THE HOUSE, PRESIDES IN THE HOUSE CHAMBER FOR THE FIRST TIME 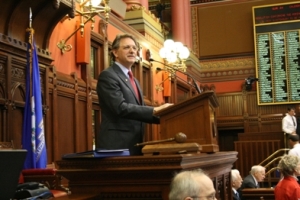 State Representative Demetrios Giannaros (D-Farmington) presided for the first time as Deputy Speaker in the state House of Representatives on Wednesday, April 9th.

According to the State Library, Rep. Giannaros is the first-non USA born person with the title Speaker and the first Greek-American to serve in that post in Connecticut. He was first elected to represent the 21st Assembly District in 1994.

Rep. Giannaros has served in several leadership positions including Deputy Majority Leader, House Chair of the Education Committee and the Energy and Technology Committee, Vice Chair of the Finance Revenue and Bonding Committee. In addition to serving as Deputy Speaker of the House, Rep. Giannaros is a member of the Higher Education and Employment Advancement Committee and the Finance, Revenue and Bonding Committee.

"It was the thrill of my life to be presiding in the peoples' house, the Connecticut House of Representatives. I thank Speaker Amann and majority Leader Donovan for the honor they bestowed on me." Rep. Giannaros said. "I will do my best to serve the people of Connecticut as Deputy Speaker and will never forget that as an immigrant I have been given a great opportunity in this great country of ours."

Deputy Speaker Giannaros immigrated with his family of seven from Greece in 1964.

A Professor of  Economics, Deputy Speaker Giannaros teaches economics, public policy and public finance at the Barney School of  Business and the University of Hartford.