Group to use funds to build senior housing in Astoria

The PCA Senior Residence, which will be located at the Presbyterian Church of Astoria's previous site at 31-30 33rd St., will be one of two HANAC senior housing developments under construction in the neighborhood. The Manhattan-based group has nearly completed its 183-unit George T. Douris tower at 29th Street and Hoyt Avenue, which is expected to open by year's end.

Maloney, who helped secure a $600,000 federal grant for the nine-story site on 33rd Street, said the project will house low-income seniors and include seven units reserved for elderly residents who have physical disabilities or are visually or hearing impaired.

"This federal investment in affordable senior housing will make a difference in many families' lives and serve to strengthen our community," Maloney said.

ADVERTISEMENT The tower, which will be a "green" building, will also include an on-site special services coordinator to aid special needs residents, Maloney said. The project will cost more than $25 million and is expected to be completed by 2010, said John Kaiteris, HANAC's vice president. A groundbreaking for the tower will likely take place in early 2009, he said.

The committee will begin accepting applications shortly before the tower opens, he said.

Additional funding for the project will be provided by the U.S. Department of Housing and Urban Development and low-income housing tax credits.

HANAC is expecting to open its Hoyt Avenue tower by the end of the year and will soon begin accepting applications for housing, Kaiteris said.

"There is a dire need for affordable housing for seniors in Astoria and throughout the city," Kaiteris said.

The total cost of that tower is $42.6 million, most of which will be provided by the city Housing Development Corporation, the state Department of Housing and Community Renewal, the City Council's Capital Assistance Grant and low-income housing tax credits, Kaiteris said.

The building will include an exercise room, a health facility, an atrium, a senior center and a two-level garage with 41 spaces for seniors and 69 public spaces, Kaiteris said. The tower, which has been in the works for years, will also have apartments for 19 city residents who were formerly homeless.

HANAC Inc. was created in 1972 as a non-profit organization that serves low-income families, new immigrants and refugees, youths, the elderly and the unemployed in neighborhoods across the five boroughs. The group offers a variety of services, including workforce development, adult education, immigration counseling and senior housing. 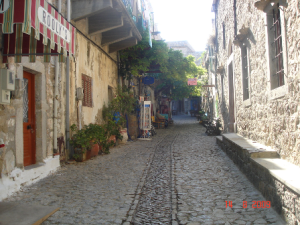