AN OPEN LETTER TO ELENA MAROULLETI

An open letter to Elena Maroulleti, founder and President of CYPRECO OF AMERICA and AKTINA Productions, AKTINA FM, Email: aktina@aktina.org

I know you have been very busy, last Friday, I peeked in on your gathering "CYPRUS 34 Years Later: A Journey To Our Occupied Cities" in Astoria, but did not have the opportunity to properly address you. The Cypriot community has very few radio outlets in Astoria, and your AKTINA production and its affiliate public organization CYPRECO OF AMERICA, with the support of generous funding from the community, has quite a reputation for keeping our culture and our community updated, and informed.

Your mother Loukia "Lucy" Maroulleti for me, and many others in the community, has a special place in my heart, on the weekend of April 04, 1999, she alone, with a few dedicated others organized the community and announced on the radio production, which you inherited from her, a peaceful demonstration for the community in front of the White House.

I remember it like it was yesterday, Elena. Your mother Loukia was a proud Cypriot with courage, the bus she got for the community, was loaded with community members, young and old, men and women, who came from all over New York City, I from Washington Heights, to Astoria on that bus bound for Washington. When we exited, my friend Tasos and I held in our hands a Hellenic flag, and she boldly remarked, "BOYS RAISE THE HELLENIC FLAG HIGH" What a woman, she made any Cypriot proud.

Elena, many , many Cypriots called you personally , on the days leading up to our HANDS OFF CYPRUS 2008 protest, pleading with you to make an announcement about our bus for Washington DC , bound for a peaceful demonstration that took place near the Turkish Embassy on July 20th. Marking the 34 th Anniversary of the brutal Turkish invasion of Cyprus.

I'm sure that you already know now Elena, that our bold public action -the Hands Off Cyprus 2008 demonstration was aired on the CBS affiliate (WUSA9) in Washington, in the July 20th evening broadcast.  CANA now has earned remarkable success for the Cyprus cause.  The Cyprus Action Network of America (CANA) through bold and assertive public advocacy, managed to achieve American network television coverage to mark July 20th  2008 as "the 34th anniversary of the Turkish invasion of Cyprus"

Elena, who did you censor any and all notices and announcements about our July 20th, 2008 demonstration, including our offer of a FREE BUS from your radio production?  Why did you ignore the pleas and the cries of the Cypriot people in your own community, who support you and your enterprise, Elena? Why did you turn your back on us?

You know very well the expression Potes Sti Mana, Ti Mana Mi Pikrines (Trans: Never bring sorrow onto your Mother) In your case Elena, you have brought sorrow to your late Mother's great legacy, and to our Mother Cyprus.

In your case Elena, the apple has fallen VERY far from the tree.

The Cyprus Action Network of America (CANA) is a grass-roots, not-for-profit movement created to support genuine self-determination and human rights for the people of Cyprus. 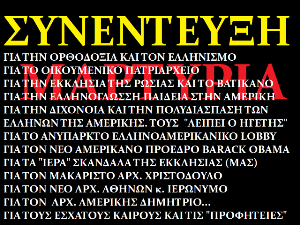