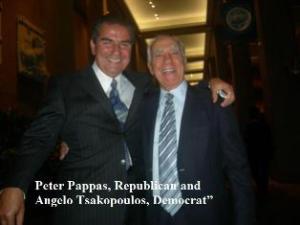 The event's highlights included greetings from noted Greek American developer, philanthropist, and Democratic party activist Angelo Tsakopoulos, who said he was very happy and encouraged to see young Greek Americans taking an interest in public affairs.  Assemblyman Gianaris told guests that he had spoken to Senator Obama about this event and that Obama was very pleased that this event was another element in the multicultural foundation of this presidential campaign.  Obama acknowledged the gifts of Hellenes to mankind and the contributions of Greek Americans in making America the greatest country in the world.

Mr. Gianaris stressed the importance of political activism both for the Greek American community and for America.  He shared his personal story of his involvement in the 1988 Michael Dukakis presidential campaign and how that became the springboard for his life in politics. He strongly encouraged supporters to go to key battleground states like Pennsylvania and Florida to campaign for Obama-Biden.

Speaker Dr. Dean Lomis, former Chairman of the American Hellenic Institute (AHI) and friend of Senator Biden highlighted the Obama-Biden support of Greece and Cyprus stressing how as a member of the United States Senate Barack Obama has supported Greek American community positions on Greece and Cyprus. Dr. Lomis detailed Joseph Biden support and leadership on vital issues for more than 30 years.  An Obama campaign field organizer in New Jersey, Ted E. Anastasiou also addressed the guests. "I don't think it any small coincidence that Greek Americans, whose heritage has contributed so much throughout history and brought about such positive change in this country and the world, are openly receptive to Senator Obama's campaign for change," Anastasiou declared.

Fundraiser event hosts Dean Sirigos, Olga Alexakos, co-hosts and chairpersons are leaders and members of numerous Greek American organizations. Event host Jeff Kurzon is affiliated with Armenians for Obama and Obama NYC.  Sirigos stated that their purpose was "to show our support for Obama-Biden and their promises of change to make our government more responsive to the needs of its people, to make our people truly secure through a harmony of power and principle, and to better project our values and ideals around the world, especially the bedrock principles of our support for Greece and Cyprus: the rule of law, democracy based on majority rule with minority rights guaranteed, and the peaceful settlement of disputes. "

Olga Alexakos thanked the guests for attending "the wonderful and important opportunity for New York area Greek Americans to rally for an Obama-Biden ticket and to make a vital contribution to this important campaign."  Alexakos and Sirigos thanked several benefactors for their generosity and support including Dr. Ana Maria Trilliouris, Sultana Glyptis Rehnberg, The Lekas family, Michael and Alice Halkias,of the Grand Prospect Hall, Nick  Tsoulos and Nick Pashalis of Avra Estiatorio, Dino and Vasilios Bakakos of the Lafayette Grill and Bar, Stella and Sam Catechis of Stellar Importing, and Gus Theodoro of Gus's Place.  Future events will be announced on the web site:  nygreekamericansforobama.com.

Gianaris is Assembly member for the 36th Assembly District in Queens and the first Greek-American to be elected to office from New York City. In the Assembly, he emerged as a leader on government reform issues sponsoring numerous measures to improve the efficiency and productivity of state government. Born to Nicholas and Magdalene Gianaris, he is a lifelong resident of Astoria and graduate of the New York City public school system. He graduated from Fordham University, Summa Cum Laude with a bachelor's degree in Economics and Political Science before receiving his law degree from Harvard Law School, attending at the same time as Barack Obama.
(foto D. Panagos) 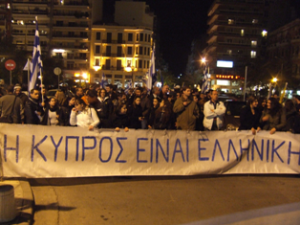