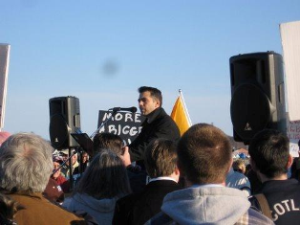 “For the past few months I have been holding economic town hall meetings across the district,” said Scontras. “Mainers I’ve talked to are deeply concerned about the financial crisis. The debt that this congress and this administration have placed on the backs of our children, and our grandchildren, is not just irresponsible, it’s immoral.”

A candidate for the Republican nomination for Congress in 2008, Scontras pointed to the further erosion in the public trust in Congress. “There was a great deal of talk about the low popularity poll numbers for Congress two years ago. Today it is not just a matter of low popularity. People simply do not trust Congress to do the right thing for America. There is a real crisis of confidence among people I talk to,” Scontras said. “Maine deserves a representative who can restore trust to the office, and career politicians simply can not gain the level of trust or confidence that the voters are demanding. We must remove the culture of corruption that has been allowed to grow.”

Citing Scott Brown’s successful bid to fill the late Ted Kennedy’s Senate seat in Massachusetts, Scontras observed, “There is a change coming in November 2010 for career politicians, and I believe Maine will be at the front of that change.

Dean Scontras was born and raised in Kittery, Maine. The youngest of seven children, he attended Traip Academy, where he was a multi-sport athlete and the Vice President of the National Honor Society. Scontras graduated from the University of Maine with a double-major in Public Management and Political Science. While at UMaine, he played for two Yankee Conference Championship football teams and earned his Varsity Letter for his efforts as a wide receiver and kick returner. After graduation Scontras moved to Washington, D.C., where he worked for several different technology firms.  He attended Georgetown University to pursue a degree in Public Policy. He and his wife, Dawn, and their two children moved back to Maine in 2005 and lives in Eliot. Scontras is co-owner of an alternative energy company specializing in the development of distributed energy solutions.