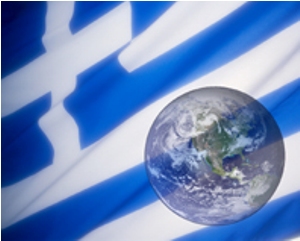 European banking shares indicate a Greek debt default may be just a matter of time.

Investors have already pushed down financial stocks enough to imply the “erosion” in book value that may result from losses tied to a sovereign debt restructuring, said Dirk Hoffmann-Becking, an analyst at Sanford C. Bernstein in London. A Bloomberg index of European financial firms dropped as much as 22 percent since April 15 to the lowest level since July.

“Deficit reduction alone doesn’t solve the debt issue,” Mayer said in a telephone interview. He estimates Greece’s debt will rise to 150 percent of gross domestic product following the country’s austerity program, from 120 percent. “Hardly anyone I know believes they can carry it out and still not restructure. This is basically the expectation across all asset classes.”

Writedowns stemming from a Greek default would total almost $200 billion, estimates Jon Peace, an analyst at Nomura Holdings Inc. in London. Banks globally could lose as much as $900 billion in a worst-case scenario where Greece, Ireland, Italy, Portugal and Spain all have to restructure their debt, Nomura estimates.

Banks holding sovereign debt are faced with a “prisoner’s dilemma,” said Hoffmann-Becking, referring to a mathematical theory that seeks to explain the behavior of two parties that can choose to either cooperate or pursue their own interests.

“From an individual bank’s perspective, it would be great to get rid of the sovereign debt,” Hoffmann-Becking said by telephone. “However, if everybody did it you’d have a rapid collapse of the government bond market and then you’d have the default. And in the default, the fact that you have no sovereign debt actually doesn’t help you at all.”

German financial companies including Deutsche Bank agreed in May to refinance maturing Greek debt and maintain existing credit lines to Greece and its lenders for the next three years. French banks made a similar pledge.

A majority of European banks haven’t tendered their Greek sovereign debt to the European Central Bank, according to an informal survey by Morgan Stanley analysts. One reason may be that some banks bought their Greek bonds when they were trading at 20 percent above par, meaning a sale to the ECB would prompt a loss, Morgan Stanley’s London-based analyst Huw van Steenis said in a note to clients on June 9.

Deutsche Bank Chief Executive Officer Josef Ackermann said May 14 that Greece may not be able to repay its debt in full, adding that Spain and Italy are “strong enough” to service their debt following the EU aid plan, while this may be “slightly more difficult” for Portugal.

Global investors have little confidence in Greece’s ability to solve its debt crisis, with 73 percent calling a default by the country likely, according to a quarterly poll of investors and analysts who are Bloomberg subscribers. Some 35 percent of those surveyed said a default by Portugal was likely, while more than a quarter said the same about Spain.

A Spanish or Italian cancellation of payments would dwarf a potential Greek default. European banks’ claims on Spain totaled $832 billion at the end of 2009, while those on Italy stood at $1.02 trillion, according to figures from the Bank for International Settlements in Basel, Switzerland. That compares with claims on Greece and Portugal of $193 billion and $240 billion, respectively.

EU banks could absorb losses on government and private debt in Greece, Portugal, Spain and Ireland without having to raise funds, Moody’s Investors Service said in a report today, after surveying more than 30 lenders in 10 nations. The value of private loans such as mortgages and business credit is greater than that tied to government debt, Moody’s said, adding that any losses on private loans would be absorbed over several years.

“Based on our stress test, we believe that these banks would be able to absorb the losses that could arise from such exposures without requiring capital increases — even under worse-than-expected conditions,” the credit rating company said.

While investors may have priced in the immediate costs of a Greek and possibly even a Portuguese default, they haven’t reckoned on the wider impact of such an event, analysts said.

“If Greece defaulted in the near future, the ramifications wouldn’t just be banks holding Greek debt, but also Spain and Portugal and Italian bonds — and how do you value Armageddon?” said Gary Jenkins, head of credit research at Evolution Securities Ltd. in London. “The idea is to postpone reality. If it had happened in a disorderly manner in May, it would’ve been such a quick event that it would have been very difficult for authorities to control the reactions on Portugal and Spain.”

Some analysts say the recent declines among European banks represent a buying opportunity on the grounds that a Greek default would be manageable and that Spain and Italy won’t have to restructure their debt. Nomura’s Peace said in a June 2 note that European bank shares are “attractive.”

“The stocks are way too deep — I don’t think we’ll see restructuring and sovereign defaults,” said Dirk Becker, a Frankfurt-based analyst at Kepler Capital Markets. “Everything depends on making a bet on whether we’ll see a restructuring or a default or not, but the EU delivered a clear message and the IMF is in the boat and we have austerity measures.”

Greece’s public finances began rattling investors late last year, when the country more than tripled its budget deficit forecast for 2009. Stock markets fell, credit default swaps to protect against a sovereign default rose, and borrowing costs climbed for indebted nations such as Greece, Portugal and Spain, as well as European banks. The euro dropped to a four-year low of $1.1876 on June 7.

New York University Professor Nouriel Roubini said June 4 that an orderly restructuring of Greece’s public debt in the next 12 months may be necessary to avoid “massive losses” for the financial system.

He recommended stretching the maturities of the country’s debt by five to 10 years, capping the interest rate at a below- market level and maintaining the face value of the bonds at par to limit writedowns for banks. Further declines in the euro would also help sustain Europe’s economies, he said.

European financial firms trade at 0.85 times book value, compared with 1.06 times on April 15 and more than two times book value at the end of 2006, based on the 52-company Bloomberg Europe Banks and Insurance Index.

Banks in Europe, on average, are pricing in an implied return on equity of 9.5 percent, below a “normalized” ROE of 12.5 percent, Hoffmann-Becking said in a May 26 note. Return on equity is a measure of profitability.

The expectation for an erosion of book value is “particularly pronounced” for French lenders, Hoffmann-Becking said. Paris-based Credit Agricole SA and Societe Generale SA trade at an implied return-on-equity of 5.8 percent and 6.9 percent, respectively, he said in the note. Societe Generale published an after-tax ROE of 11.1 percent in the first quarter, while Credit Agricole didn’t report a figure.

“If you look at some of the names like Credit Agricole or Societe Generale, they’re trading well below tangible book and so you’re looking at some 20 percent to 25 percent cuts to equity,” Hoffmann-Becking said in a telephone interview. “I think that certainly covers the primary effects of a potential writedown on Greek, Irish or Portuguese debt. The thing that we may not have priced in, in full, is secondary and tertiary effects.”

French banks had claims on Greece of $78.8 billion at the end of 2009, the most of any country, according to BIS figures. In Germany, where banks’ Greek claims totaled $45 billion, the risks probably lie mostly with Landesbanks and government-owned lenders that aren’t publicly traded, Hoffmann-Becking said. 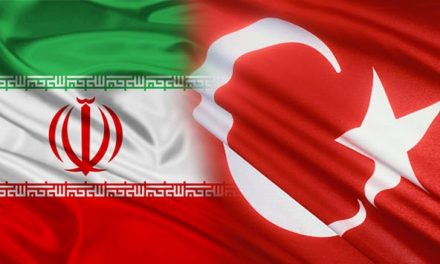 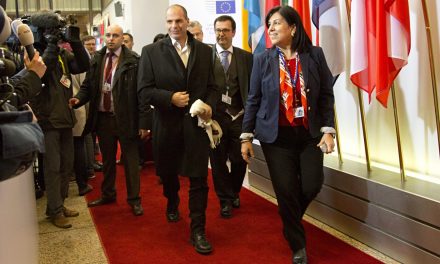 “Turkey is now at a different point in international relations” 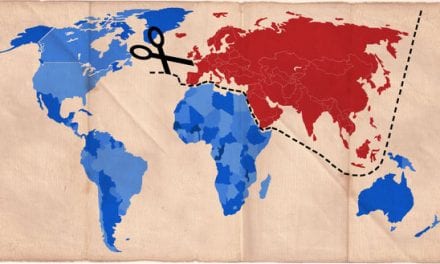 The rise of the Eurasianist vision in Turkey