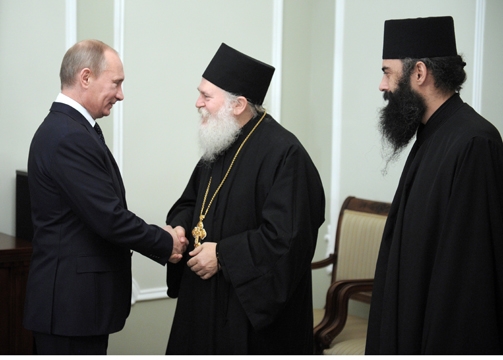 Vladimir Putin: Father Ephraim, dear guests, I am happy to greet you here in Moscow. I would like to thank you and Mount Athos Holy Community with all my heart for the decision to bring the Cincture of the Virgin Mary, one of the most treasured Orthodox relics, to Russia. Due to the Holy Community’s decision and your efforts, hundreds of thousands, even millions, of Orthodox believers in Russia have had the opportunity to see the relic.

Vladimir Putin: Your efforts certainly show the bonds between our nations and will strengthen them. This will undoubtedly give an impetus for further development of the relations between our countries. Thank you very much.

Archimandrite Ephraim: Mr Putin, I am very glad to have been by your side all this time. We are amazed at the number of Russian people who came to worship the Cincture. All of us, the monks at Vatopedi Monastery who brought the belt, have attended the sites of worship and personally witnessed people’s eagerness to touch the holy relic. This shows that Russians have profound faith. I am certain that this is the greatest strength of your nation, and it is a strength than brings our countries together. Greece is going through a difficult period and I ask you to provide assistance to our country wherever possible under these challenging conditions. I would also like to thank Mr Yakunin, chairman of St Andrew the First-Called Foundation’s board of trustees, for his efforts and participation, which made it possible to bring the relic to cities across Russia. 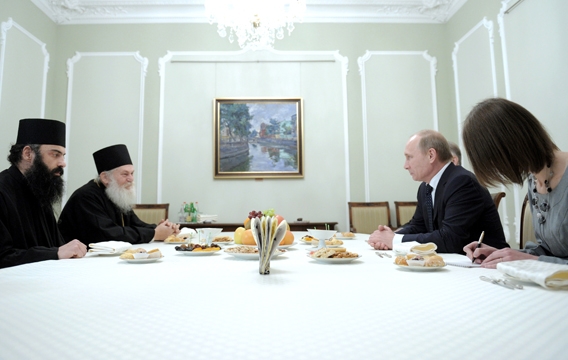 Moscow is the 15th Russian city where believers have had the opportunity to view the relic of the Virgin Mary. As Patriarch Kirill of Moscow and All Russia said, this event has truly demonstrated the faith that Russians have, and this proves the ties and the permanent connection that already existed before and continues to exist between Russia and Mount Athos. Ever since the appearance of first monasteries, Athos has always provided assistance to your country through ordinary Russian people and elders on Athos. We must not forget Vladimir, Grand Prince of Kiev, who introduced Christianity in Rus after choosing the Rite of Constantinople. I am certain that the belt of Virgin Mary has made your people’s faith even stronger. We receive telephone calls all the time, with people sharing their miraculous experiences, such as having a child after ten years of marriage. There have been 20 such cases already. There will certainly be a book on all these miracles that have occurred during the relic’s journey around Russia.

Vladimir Putin: If this helps to solve our demographic issue, it is most welcome.

Archimandrite Ephraim: Some 4 million ribbons symbolising the Cincture have already been distributed.

Vladimir Putin: I hope it will give people support in their lives, particularly the believers. That is most important.

Vladimir Putin: I remember my visit to Mount Athos and the warm welcome I received. I want to thank you once again and ask you to pass my best wishes to the Holy Community. I remember the people who accompanied us there and those who accompanied us unofficially as well. One of them stuck in my memory the most, and I told you about it.

Archimandrite Ephraim: Certainly. The Holy Mountain shows its love for you.

Vladimir Putin: Many thanks. Russia and Mount Athos have centuries-long ties, going back to the 18th century. There is a Russian monastery and many Russian pilgrims visit the mount.

Archimandrite Ephraim: The Holy Mountain existed even before the 17th century and there were monks from Russia, as well as elders and pilgrims.

Vladimir Putin: We will always remember that heartfelt atmosphere and warm hospitality. Thank you. 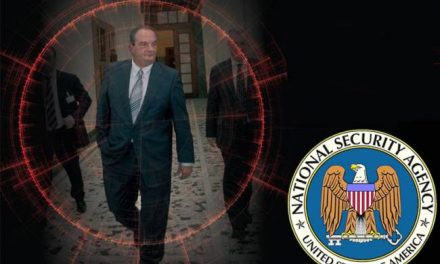 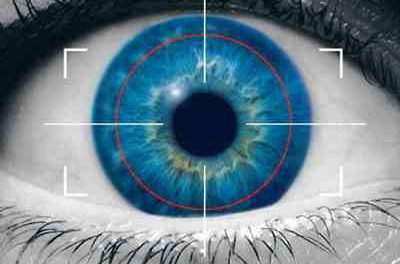