On the morning of Sept. 11, 2001, the presidency of George W. Bush changed instantly. In a new collection of never-before-seen photographs from that day, the president can be seen responding to the worst terrorist attack in United States history — an event that would redefine his time in office and propel the nation into two wars in Afghanistan and Iraq.

The images, which were given to FRONTLINE through a Freedom of Information Act request, provide a new window into President Bush’s actions on 9/11 — from the initial scramble for information upon learning of the attack at an elementary school in Florida, to his meetings with senior staff throughout the day, and his return to the White House that evening, where in an address to the nation he vowed to “find those responsible and bring them to justice.”

The images were released Friday in response to a FOIA request by Colette Neirouz Hanna, coordinating producer for the Kirk Documentary Group, which has covered the legacy of 9/11 in multiple films for FRONTLINE, including Bush’s War, Cheney’s Law, and the forthcoming investigationThe Secret History of ISIS.

They were taken by Eric Draper, who was the president’s personal photographer. “Capturing that story was difficult,” Draper told the website Storybench in a 2015 interview. “I had to focus on being in the right place at the right time and push back the emotions that I was feeling to truly capture the story. Everyone did their job that day and I knew my job was to have a crystal clear focus to document what was in front of me, for others to place it into history.”

The collection of photos from the George W. Bush Presidential Library and Museum is now the third to be released in response to FOIA requests from Neirouz Hanna. One batch, released by the National Archives in July 2015, contained more than 350 behind-the-scenes images of 9/11 by Vice President Dick Cheney’s personal photographer. A set of 2,664 images released one month earlier provided a rare glimpse of Cheney’s tenure in office. Here is a selection of photographs from the latest release. 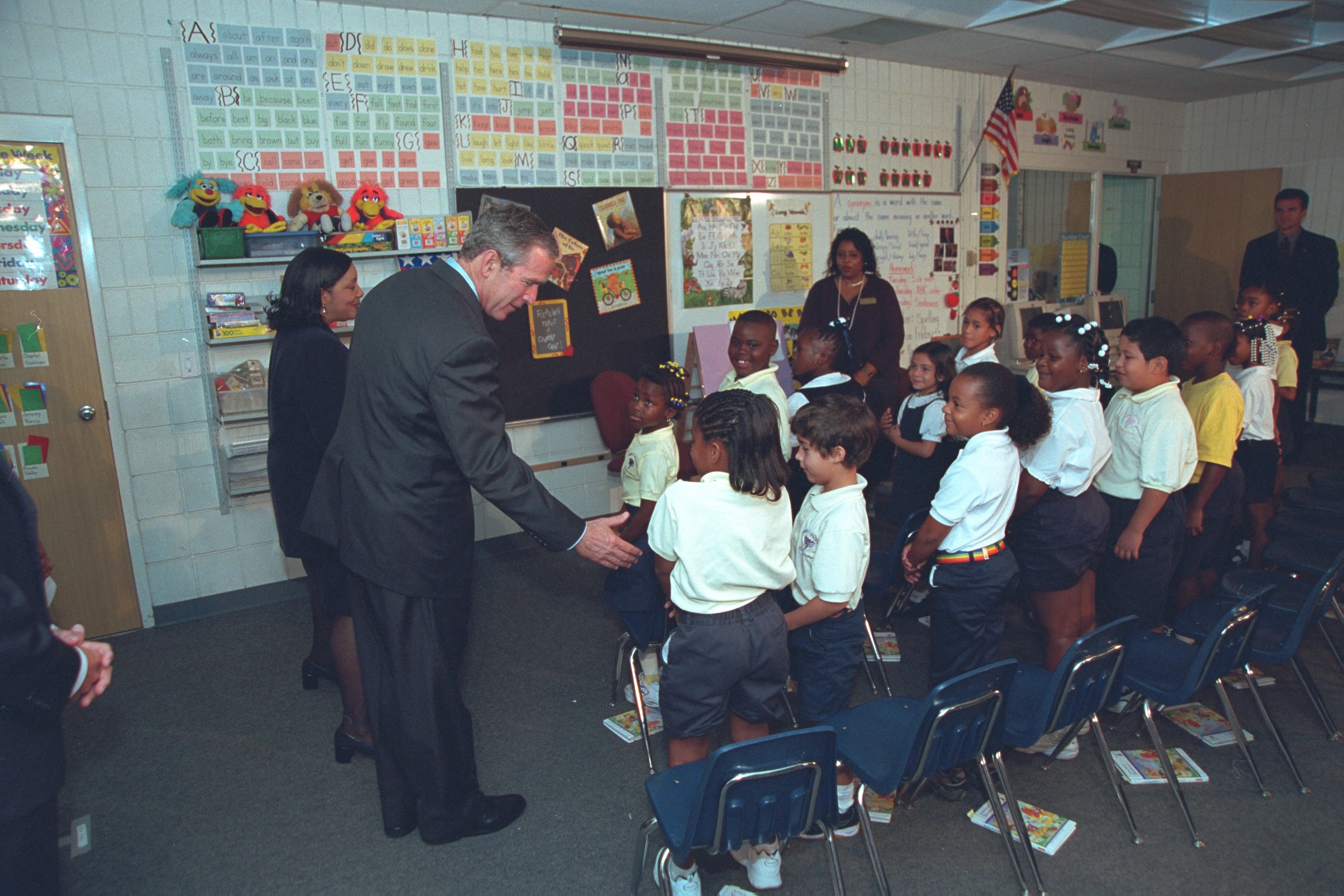 On the morning of Sept. 11, 2001, the president was visiting Emma E. Brooker Elementary School in Sarasota, Fla. when news of the attack on the World Trade Center broke. 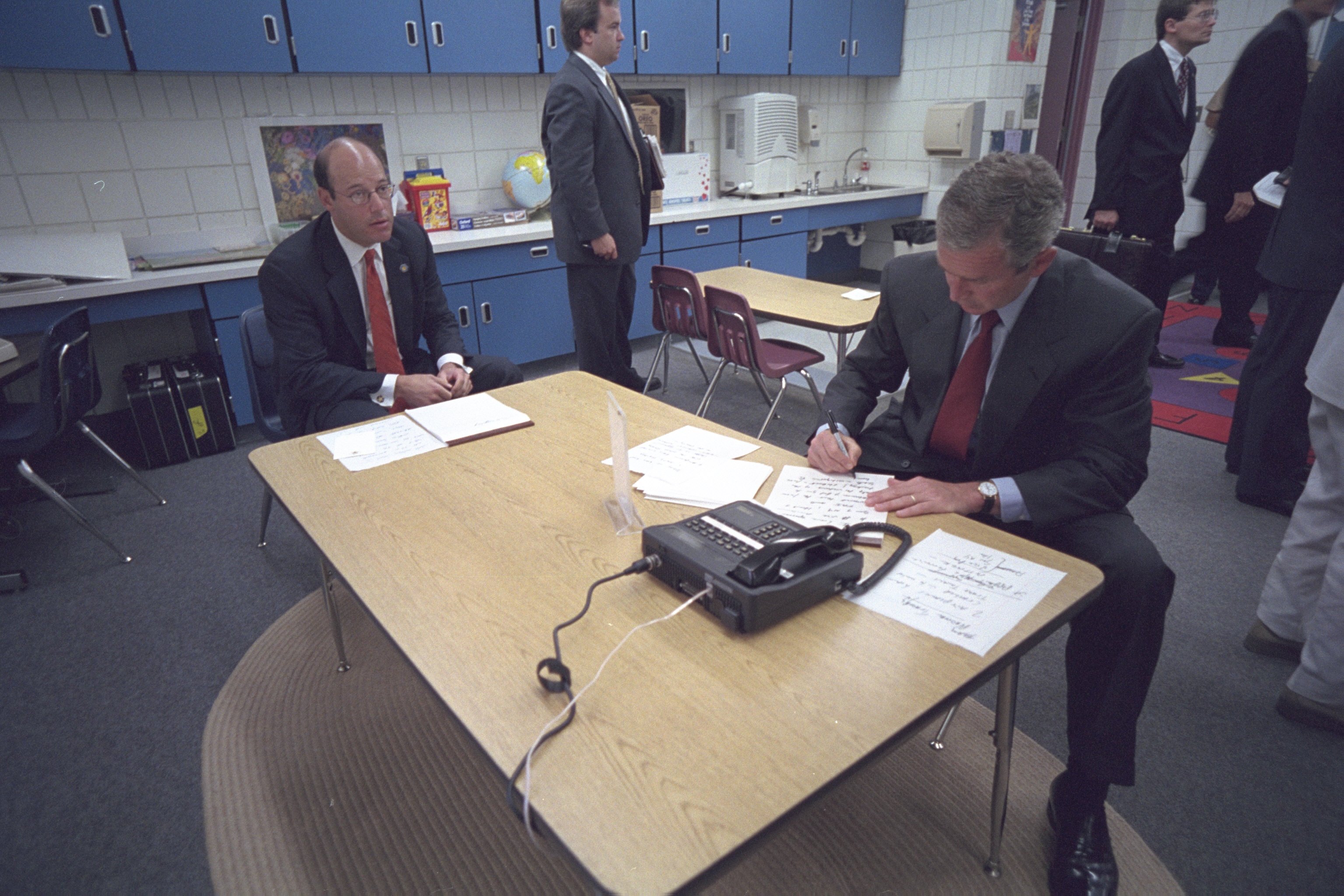 The president and his staff, including Press Secretary Ari Fleischer, pictured left, were then brought to a holding room at the school, where he prepared to address the nation. “I have spoken to the vice president, to the governor of New York, to the director of the FBI, and have ordered that the full resources of the federal government go to help the victims and their families — and to conduct a full-scale investigation to hunt down and to find those folks who committed this act,” he said. “Terrorism against our nation will not stand.” 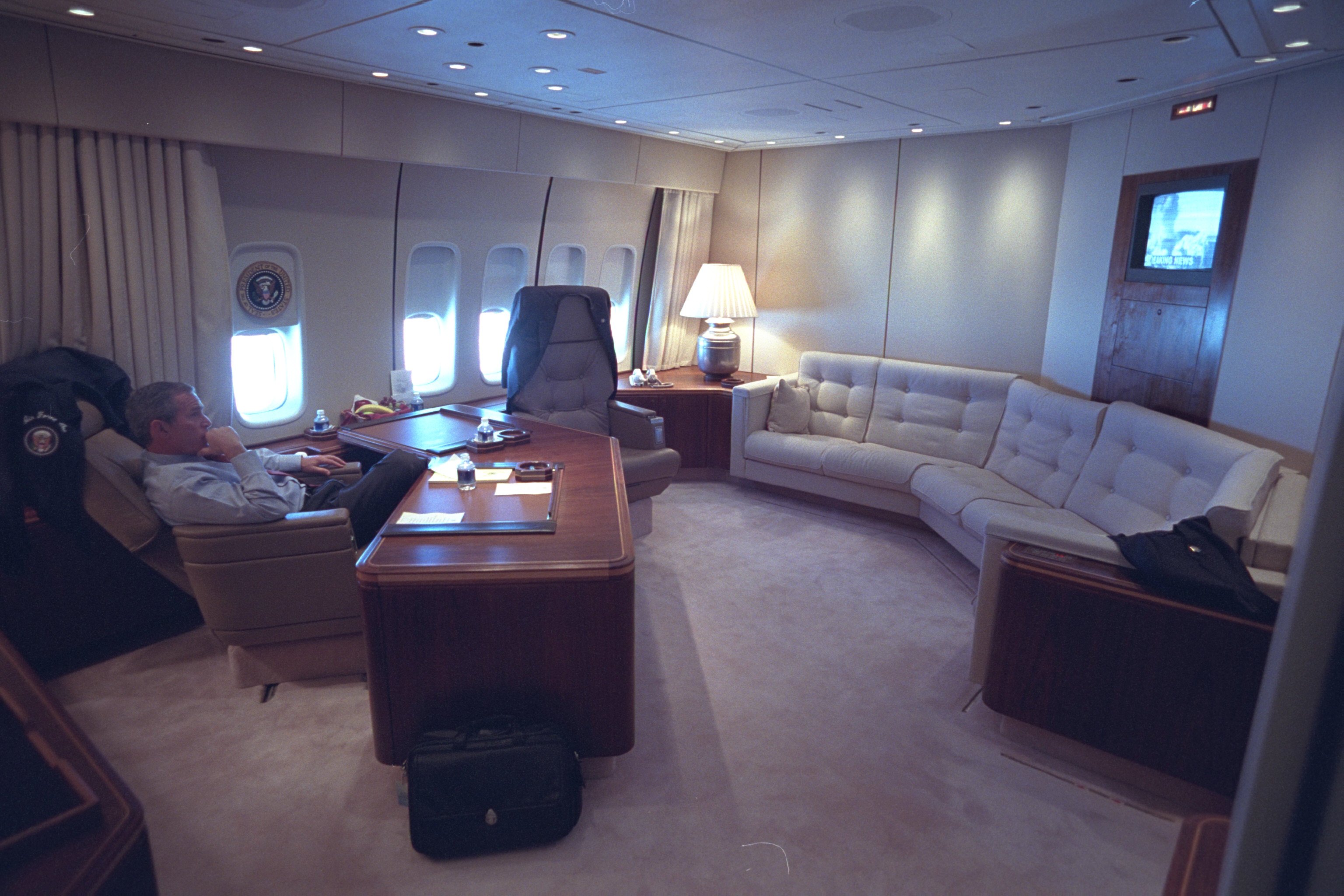 The president was whisked onto Air Force One and was flown to Barksdale Air Force Base in Louisiana. Here he is shown watching television coverage of the attacks from his office on the plane. 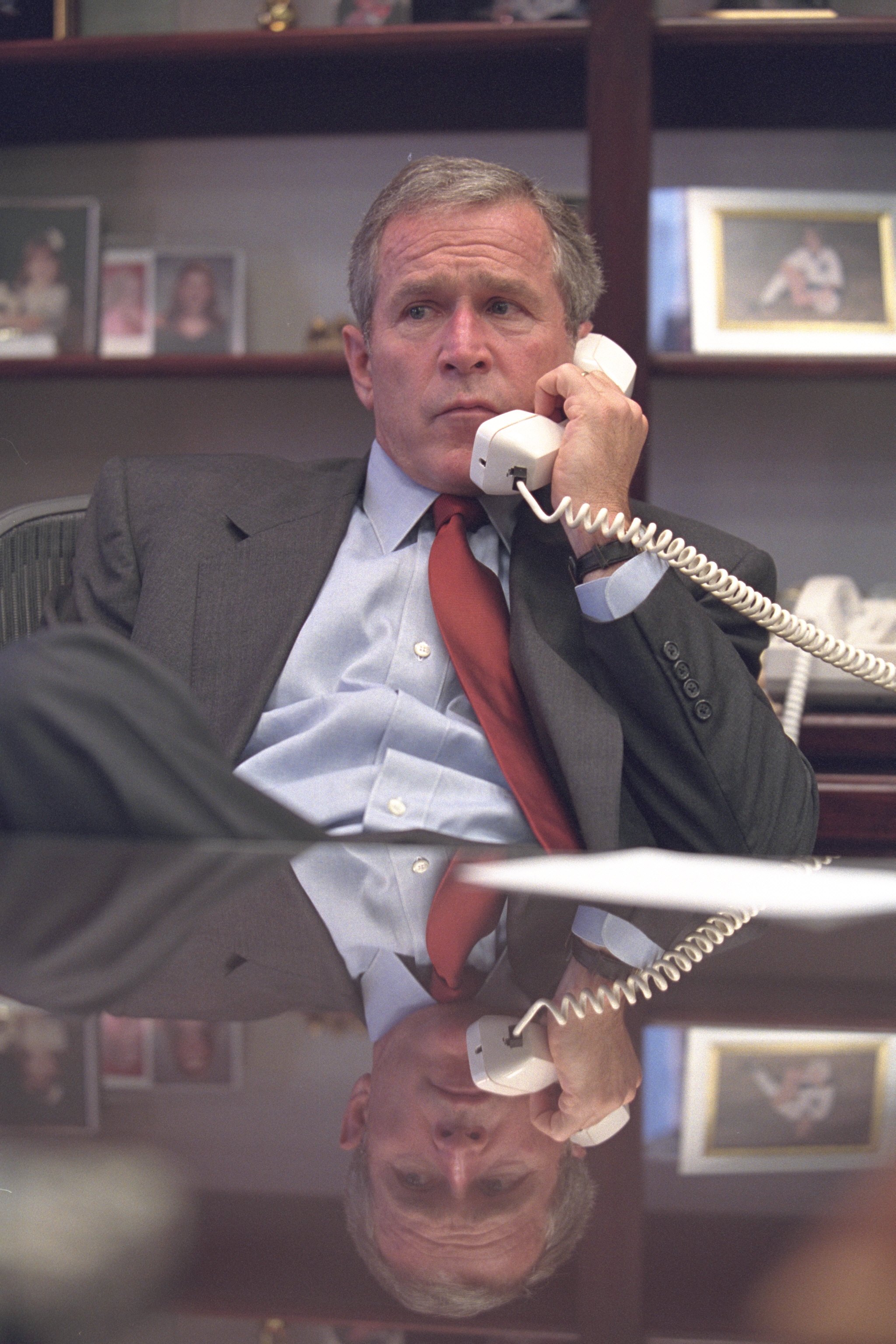 President George W. Bush talks on the telephone at the General Dougherty Conference Center at Barksdale Air Force Base. The president with senior adviser Karl Rove at Barksdale Air Force Base. 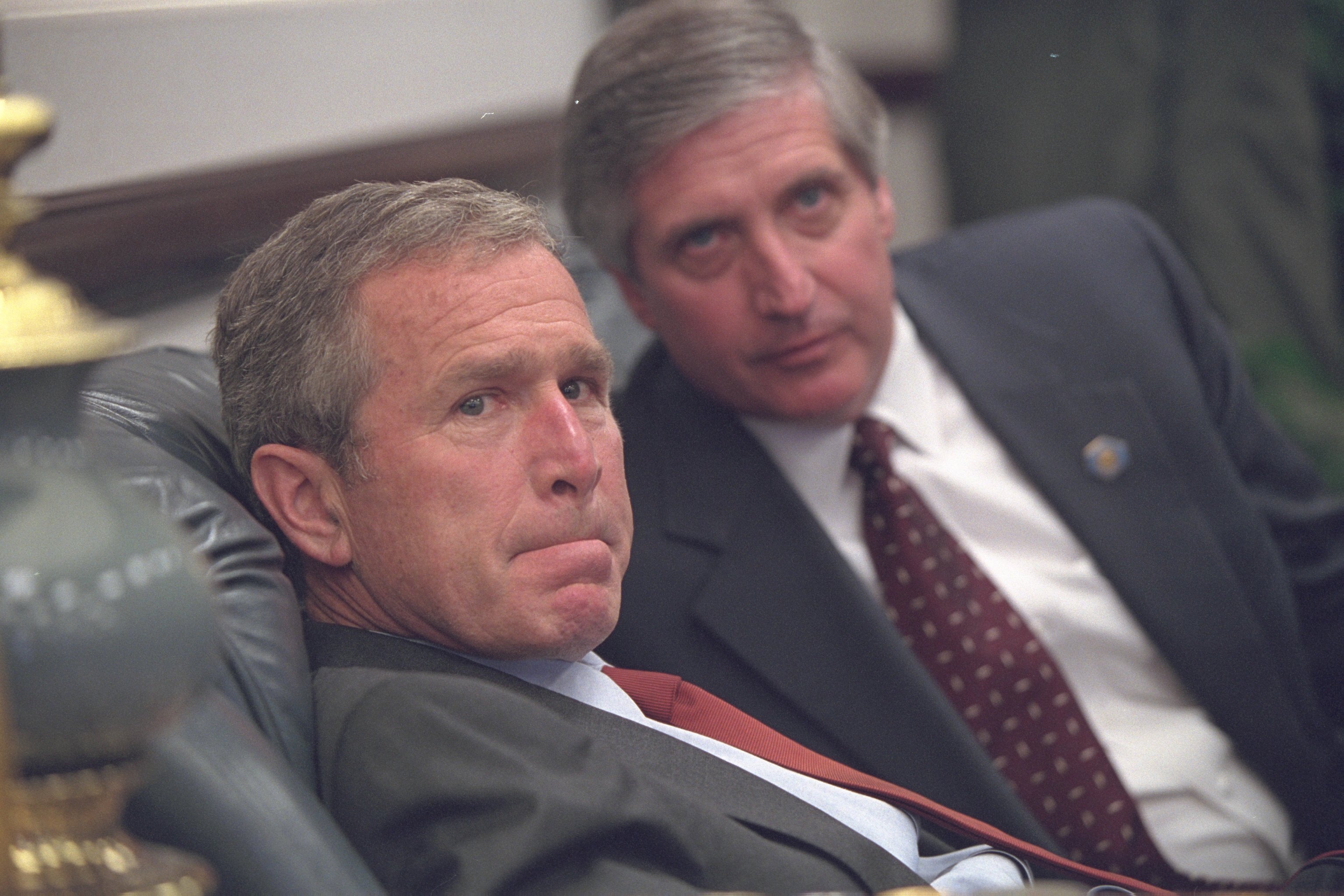 The president with White House Chief of Staff Andrew Card at Barksdale Air Force Base. Before leaving the base, the president held a press conference at which he said, “Make no mistake: The United States will hunt down and punish those responsible for these cowardly acts.” 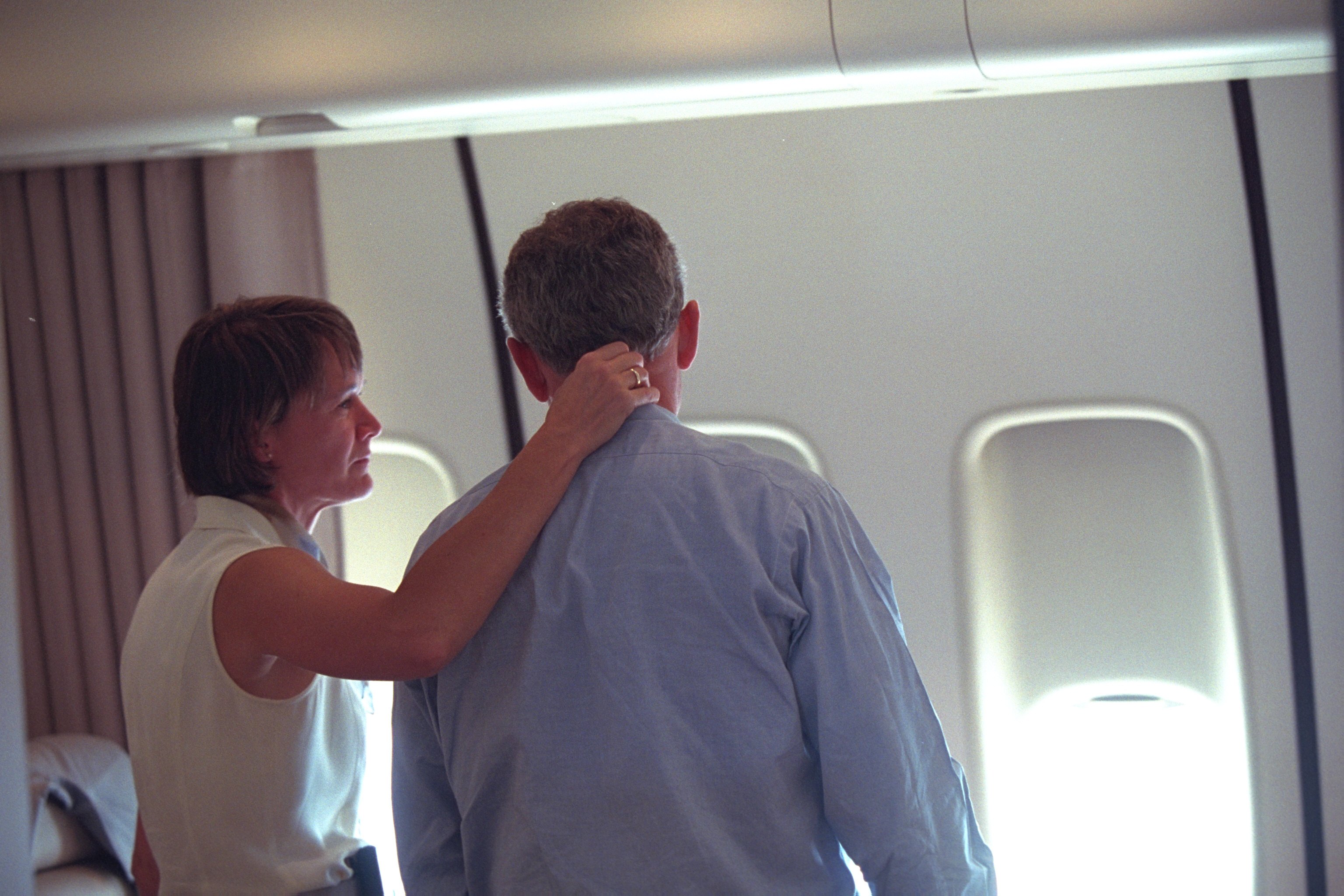 The president is consoled by Lt. Col. Cindy Wright of the White House Military Office aboard Air Force One. After leaving Louisiana, the president was flown to Offutt Air Force Base in Nebraska before he headed back to Washington D.C. 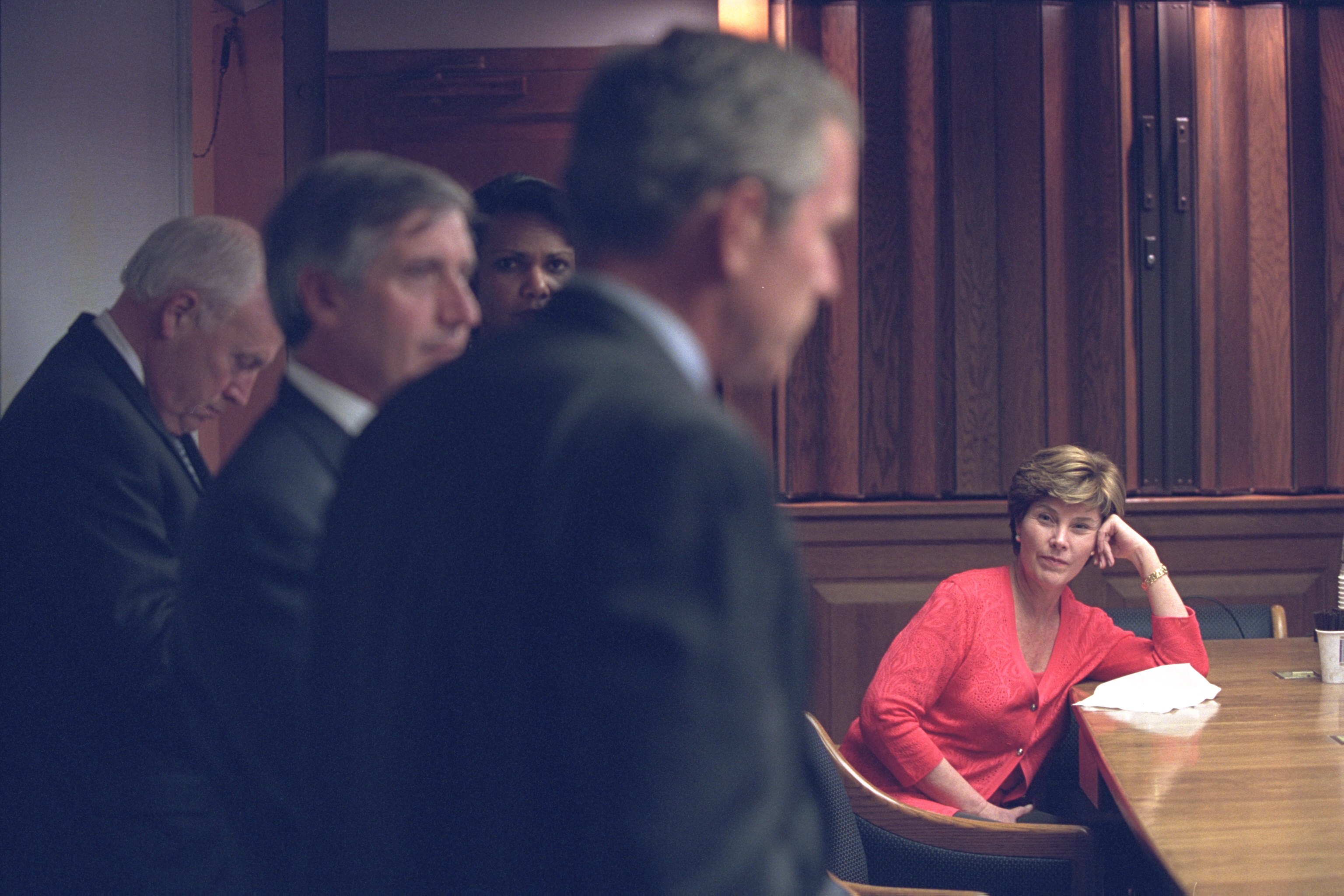 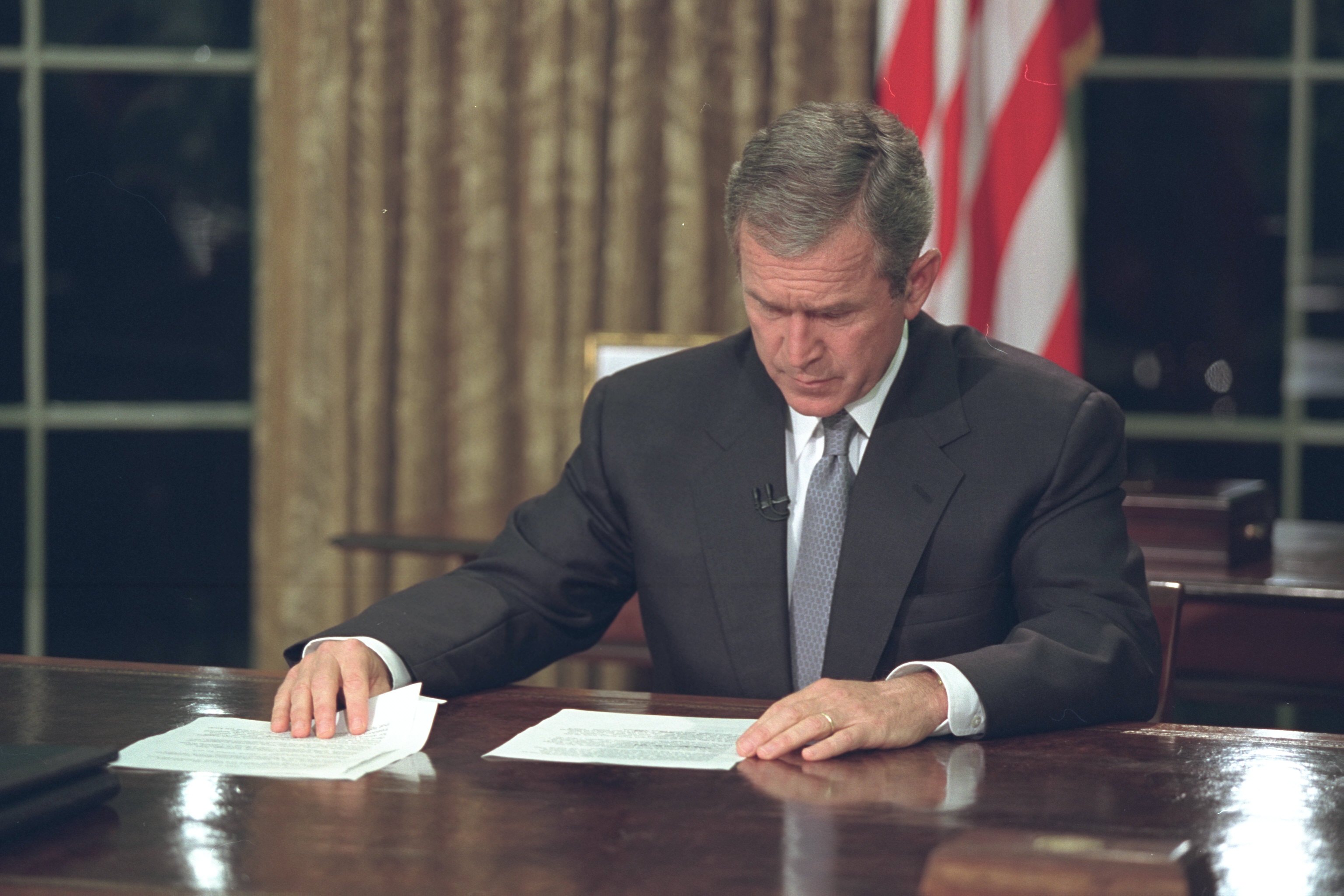 At 8:30 p.m., the president addressed the nation from the White House. In his speech, he set the tone for the wars to come in Afghanistan and Iraq. 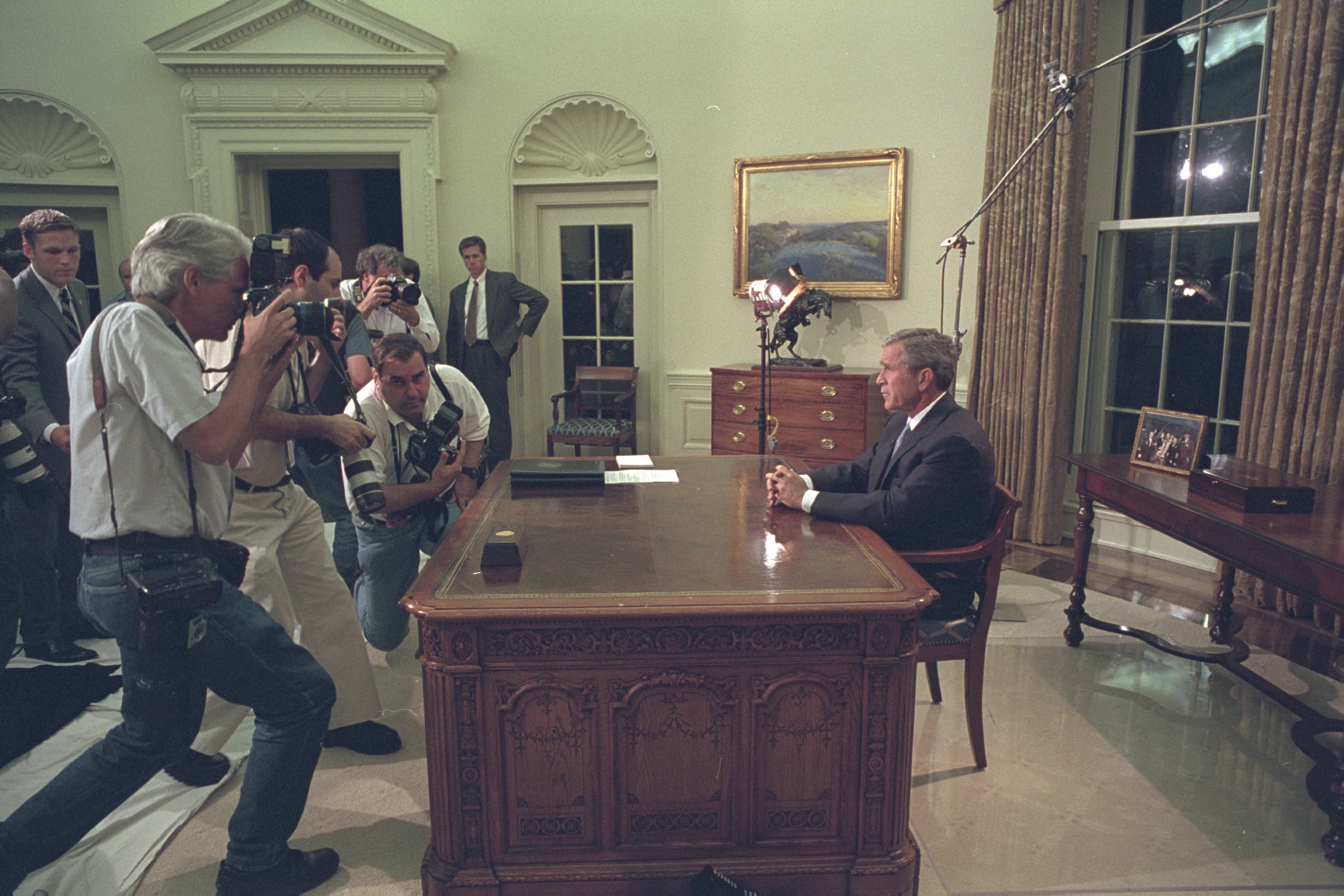 “I’ve directed the full resources for our intelligence and law enforcement communities to find those responsible and bring them to justice,” the president said. “We will make no distinction between the terrorists who committed these acts and those who harbor them.” 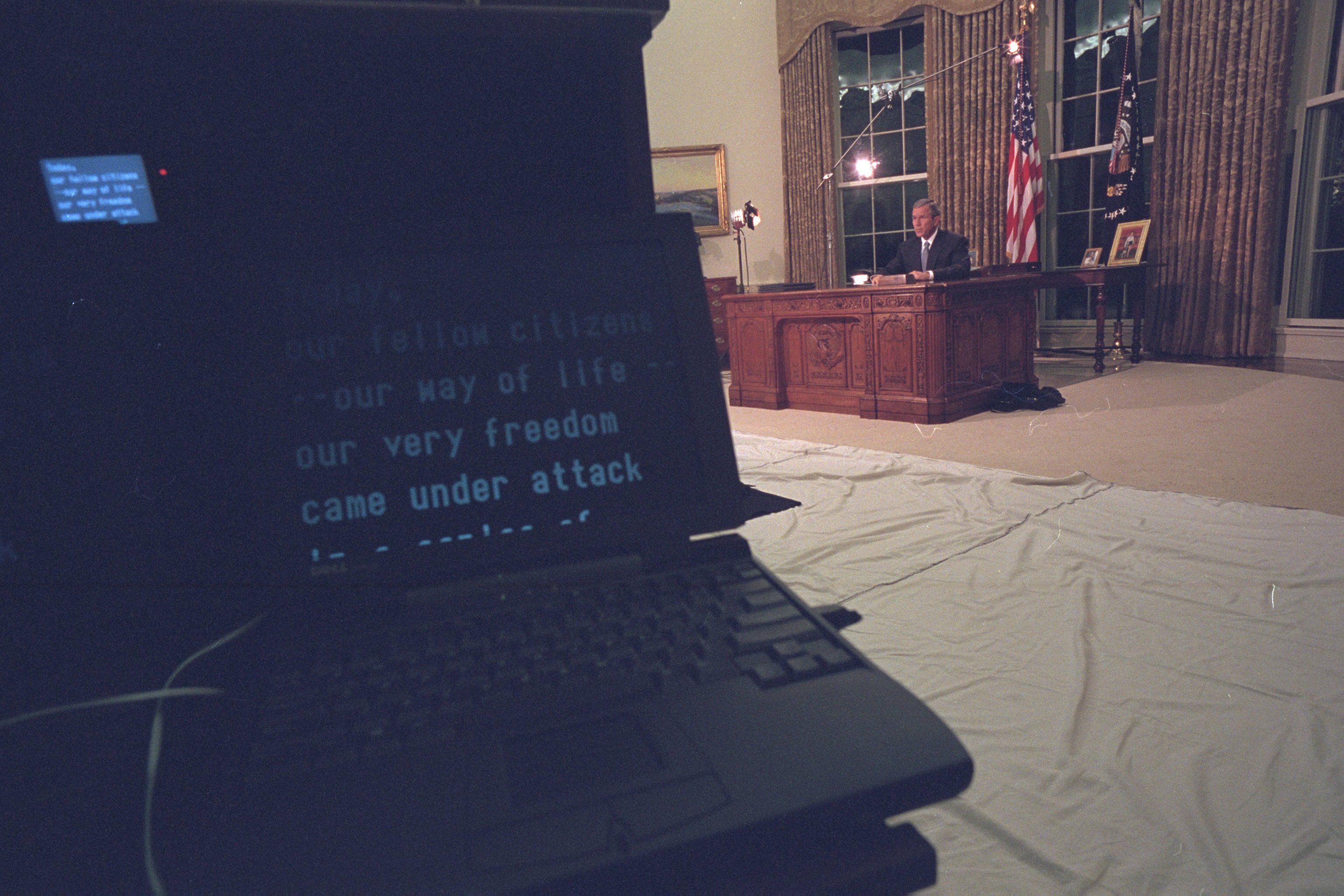 The president’s speech on the teleprompter. All photos by Eric Draper Courtesy of the George W. Bush Presidential Library and Museum/NARA 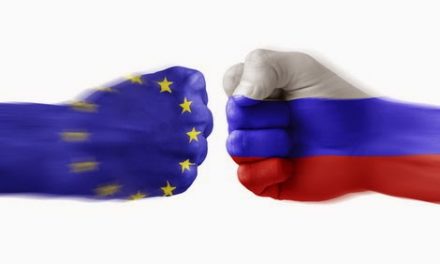 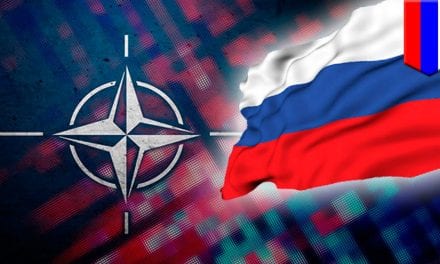 The Future of NATO: Trade-Offs and Possible Scenarios Akar: US ultimatums not helpful 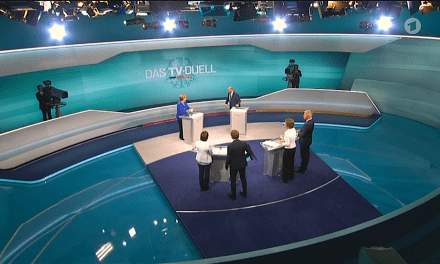